The rail network and how we use it 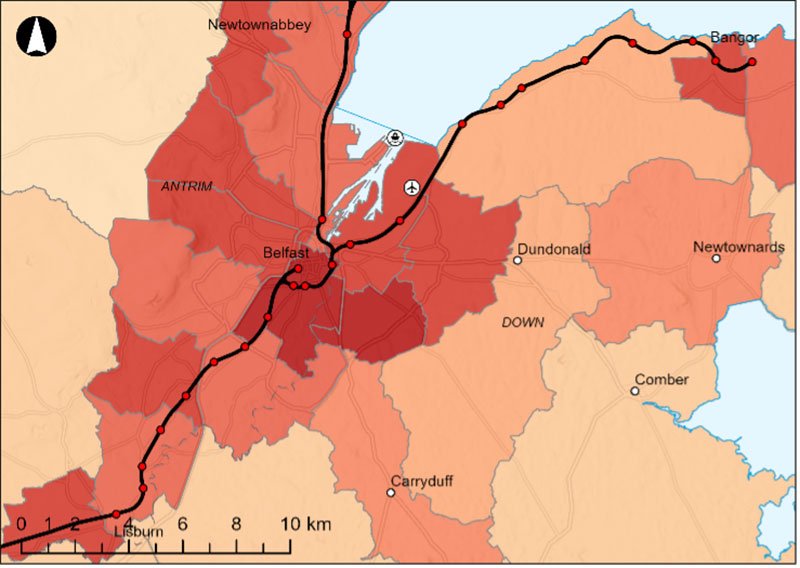 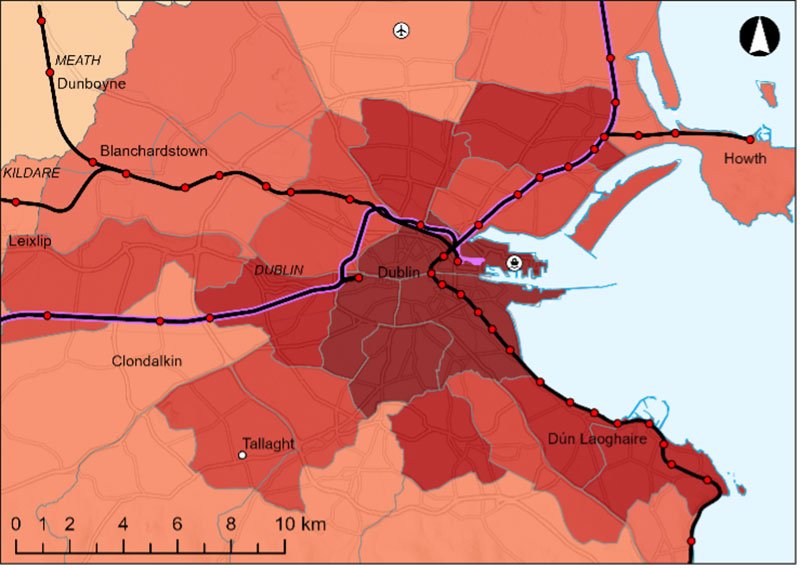 The population density of the island of Ireland is highest along the east coast, particularly around the two largest cities of Dublin and Belfast, and the corridor between them.

Relatively high population densities are found in Leinster and eastern Ulster, as well as in the vicinity of the other major cities of Cork, Derry/Londonderry, Galway, Limerick, and Waterford. The areas of lowest population density are found along the western seaboard outside the main cities and regional centres.

There are approximately twenty rail lines for passenger travel on the island of Ireland. These mainly support intercity train services and, between them, stop at 199 stations across the network.

The island of Ireland’s rail network is centred on Dublin and, to a lesser extent, Belfast. The network is most extensive in the south and the east of the island. At its peak in the early twentieth century, almost every town in Ireland was served by rail.

While the network contracted in the mid-twentieth century some routes have reopened in recent decades, including lines from Cork to Midleton, Ennis to Athenry, and Whiteabbey to Antrim.

Enhancements to the existing track and stations have also occurred in recent years, such as four- tracking between Inchicore and Hazelhatch and the introduction of hourly services between Derry/ Londonderry and Belfast.

Most rail corridors radiate from the two cities or branch off the main routes to them. The route from Waterford to Athenry via Limerick is the only key cross-country link that does not connect directly to Dublin or Belfast.

Five counties in Ulster on either side of the border (Donegal, Tyrone, Fermanagh, Monaghan, and Cavan) have no connection to the rail network. The network’s focus on Dublin and Belfast necessitates lengthy and circuitous routes for rail travel within and across many of the regions.

Each of the seven major cities serves as a terminus for rail services. Dublin, Belfast, and Cork each have a suburban rail network, while the other major cities only have one station each. The rail networks for the three cities with suburban services are shown in more detail on the left.

There are three rail freight services on the network, including the recently opened Ballina to Waterford Port. These services connect Ballina, Westport, and Navan to the ports of Waterford (Belview) and Dublin. The freight lines from Mayo share track with passenger services along the corridor from Mayo to Dublin, along with the corridor from Kildare to Waterford for services to Belview. Freight services to Navan share track with passenger services between Dublin and Drogheda before continuing to Navan on a line which is no longer served by passenger trains. There are no rail freight operations in Northern Ireland.

As an island, ports and airports are the main international gateways. Four of the island’s ports are connected to the rail network (Larne and Rosslare for passengers and Belview and Dublin for freight).

No airport on the island currently has a rail connection, but all three airports in Northern Ireland are located adjacent to a rail line. The Lisburn – Antrim line next to Belfast International Airport is disused, there is no station at City of Derry Airport, and for Belfast City Airport the closest station is over a one kilometre (0.6 miles) walk away on the other side of a dual carriageway. Kerry Airport is likewise located around one kilometre from the nearest station.

The proposed MetroLink in Dublin will provide a metro connection to Dublin Airport. While this will not be a direct connection to the national rail network, it will allow for interchange with the mainline rail network at Glasnevin.